OpenMAX AL is a royalty-free, cross platform open standard for accelerating the capture, and presentation of audio, video, and images in multimedia applications on embedded and mobile devices. OpenMAX AL includes the ability to create and control player and recorder objects and to connect them to configurable inputs and output objects including content readers/writers, audio inputs and outputs, display windows, cameras, analog radios, LEDs, and vibra devices.

The OpenMAX AL 1.0.1 specification and header files are available in the Khronos Registry

The OpenMAX IL (Integration Layer) API defines a standardized media component interface to enable developers and platform providers to integrate and communicate with multimedia codecs implemented in hardware or software.

The OpenMAX IL 1.1.2 specification and header files are available in the Khronos Registry
OpenMax IL component sample (65 KB)
This source code is provided as a sample implementation of a base-profile OpenMax IL component. Although it passed OpenMax conformance tests at the time of publication, this code does not mandate how OpenMax should be implemented; it is simply one example of how OpenMax may be implemented. Because this sample is not being actively maintained and the conformance tests may evolve over time in subsequent revisions, it is possible that this sample will not pass all base profile conformance tests in the future.

OpenMAX DL (Development Layer) APIs contains a comprehensive set of audio, video and imaging functions that can be implemented and optimized on new CPUs , hardware engines, and DSPs and then used for a wide range of accelerated codec functionality such as MPEG-4, H.264, MP3, AAC and JPEG.

This version includes clarifications and corrections to the previous version (1.0.1). All implementations should aim to match this version for interoperability. 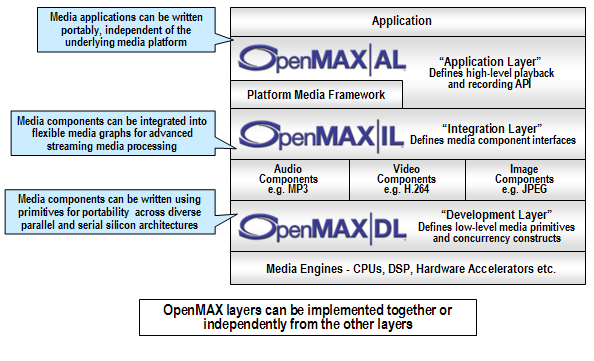